Here’s some tidbits about the stories included in this years Writers of the Future, Volume 34, and the incredible artwork.

A djinn owes her liberator a wish, but what’s she to do when he refuses make it? One of my favorites, “Turnabout” by Erik Bundy is a tale brimming with travel, adventure, and dry humor, and Adar Darnov‘s illustration is breathtaking.

“A Smokeless and Scorching Fire” 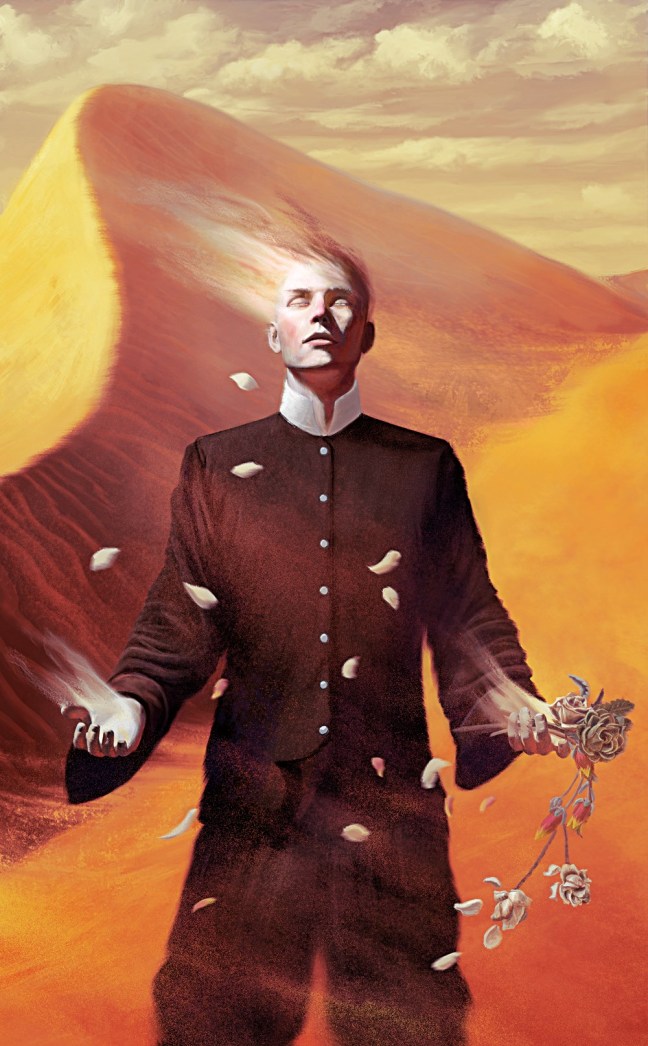 This illustration by Kyna Tek won the Grand Prize for Illustrators of the Future, and it portrays Erin Cairns’ story, “A Smokeless and Scorching Fire,” perfectly.

“Howler on the Sales Floor”

If you wondered what The Office would be like if Dwight were an interdimensional hellbeast, try reading Jonathan Ficke‘s “Howler on the Sales Floor.” It’s short and awesome and a laugh-out-loud kind of read, and Sidney Lugo‘s illustration takes that awesomeness to the next level. 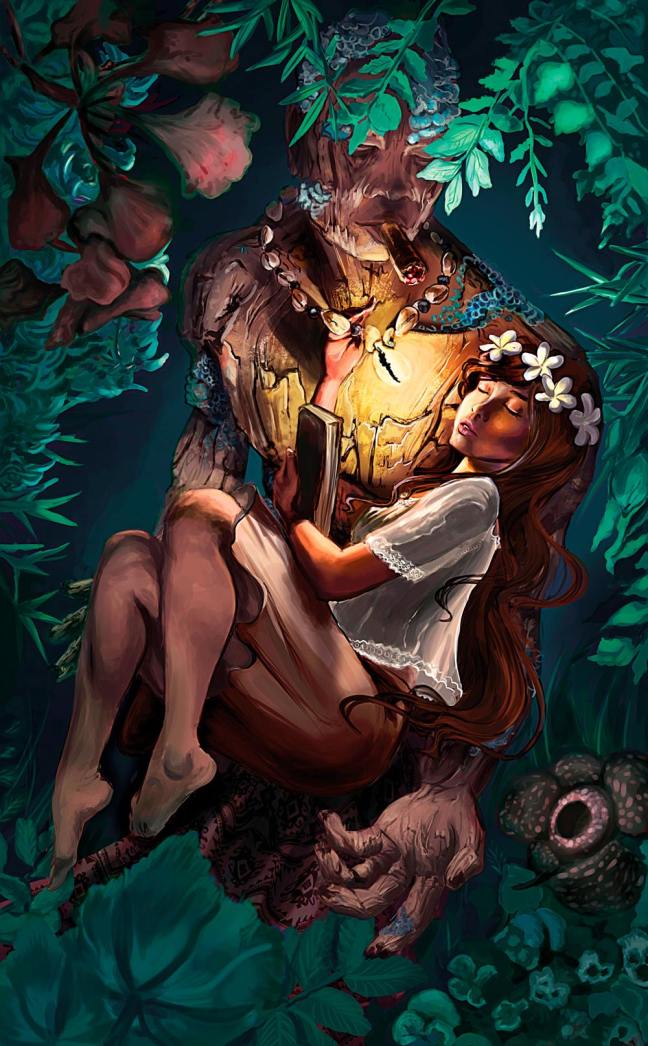 If you want a Beauty-and-the-Beast romance with a twist from Filipino lore, check out “Odd and Ugly” by Vida Cruz, not to mention its gorgeous illustration by Reyna Nicole Rochin.

“The Minarets of An-Zabat” (mild violence) 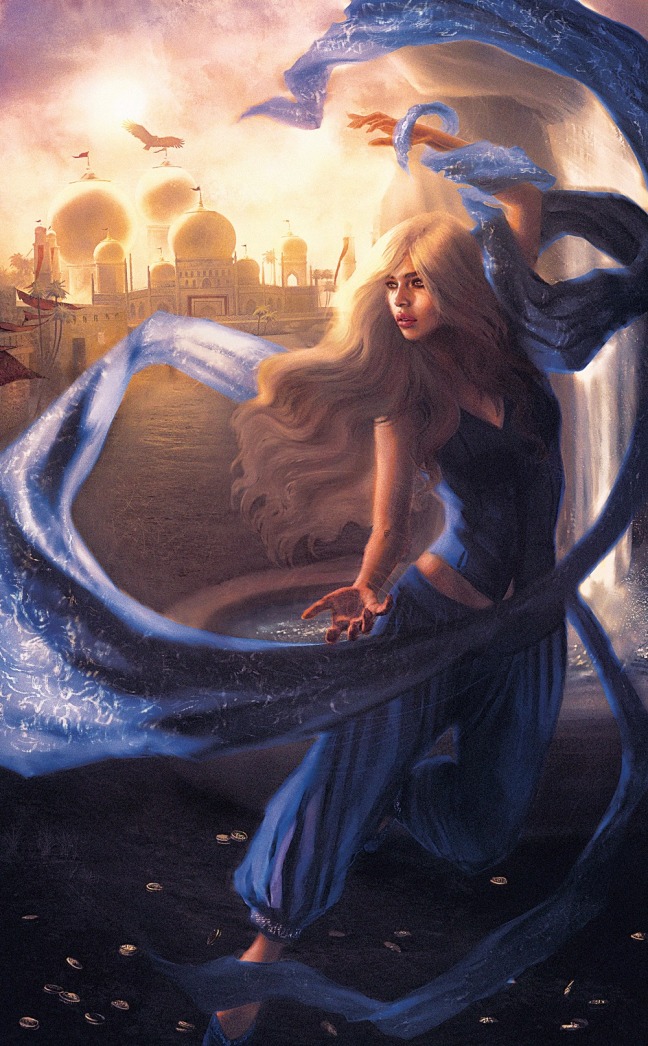 If you want to get launched into a new world with its own unique culture clashes, political intrigues, and magics, Jeremy TeGrotenhuis‘ “The Minarets of An-Zabat” would be for you. His story immerses you into the culture and conflicts surrounding Alder, a “Hand” of the Empire, a young sorcerer searching for where he belongs. Of course, his plans get turned on their head when he meets a Windcaller woman dancing in the streets. It feels like so much more than just a short story, and the accompanying illustration by Brenda Rodriguez leaves me breathless.

“Mara’s Shadow” by Darci Stone is a sci-fi medical suspense that kept me up well-past my bedtime. It also compelled me to hold my husband closer and cuddle my son a bit longer. But if you want to know why, you’ll have to read the story. Not only is it thrilling, but it’s also a technical masterpiece. The detail and textures Quintin Gleim imbues into his art makes me feel the same about the accompanying illustration.

“What Lies Beneath” (mild violence)

Not only has Cole Hehr given us a beautifully composed Grecian tale of immortals and monsters (and artist Maksym Polishchuk illustrates that perfectly), but it’s also a human tale of the lies we tell ourselves to justify our actions and our fears. Not only must this ancient sorcerer face the creature that lives beneath the waves, he must also face the creature that is himself.

Eneasz Brodki‘s urban grunge tale “Flee, My Pretty One” encapsulates so many current social issues that it’s hard to know where to start. Discrimination against the disabled. Collaboration with oppressive governments. Victimization of collaborators. Terrorism. Police violence. Environmental degradation. Corporate exploitation of resources and persons. And to top it all off, the hazy realm of human motivations and rationalization. This is no story for the faint of heart. Take it head and get ready for some intense conversation afterward, internal or with friends. Alana Fletcher‘s illustration provides any excellent focal point for conversation and reflection on the story.

“Face in the Box” (brief language)

Janey Bell‘s “Face in the Box” provides an intriguing world where technology and environment aren’t far-removed from one another. In our current world of extremes, this story (and its accompanying illustration by Bruce Brenneise) tells me that even while we might need to be tough as nails to get by, there’s always room for compassion, mercy, and compromise. It’s a little slice of peace and quiet in turbulent times, and the tale and illustration lift my spirit. 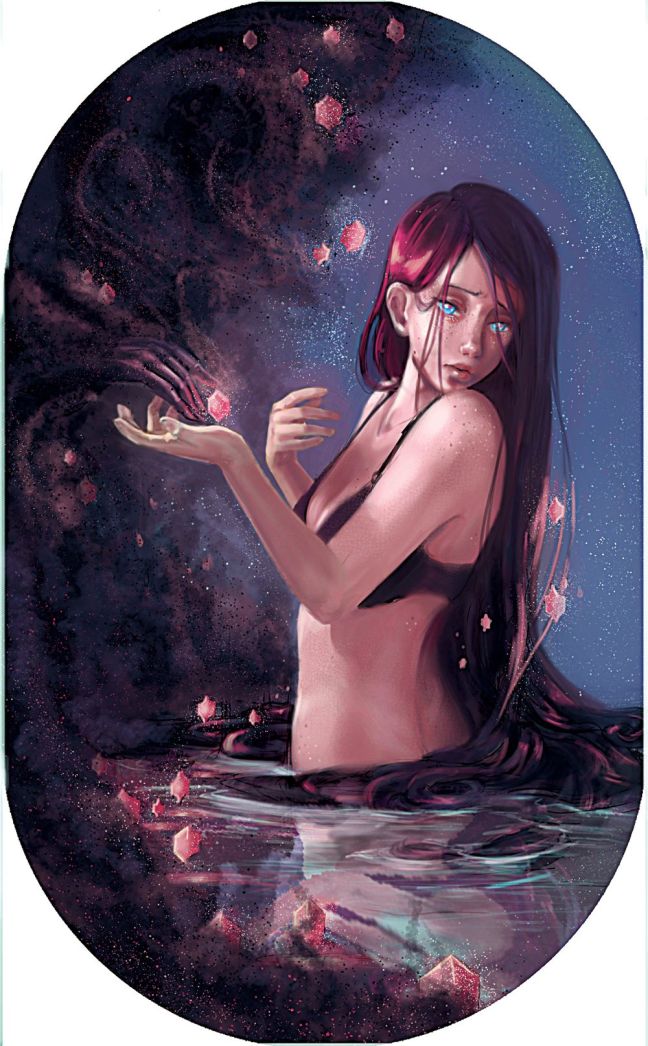 When I began “A Bitter Thing” by N.R.M. Roshak, I wasn’t sure I’d enjoy it, but it engrossed me anyway. In fact, the story demanded that I read it. Roshak excels at imagining the world through a stranger’s eyes, and in this story, the stranger is also a stranger to our world. Jazmen Richardson‘s riveting illustration depicts the story with all its alien sensuality. Yet, the themes–a philosophical look at addictions, particularly from the manufacturer’s perspective–apply as easily to real life. Just what is our responsibility to the “other”?

Diana Hart caught me in the web of her alternate reality tale the moment I realized her main character is Smokey the Bear. When the US government instates a registry for people that can change into animals, discrimination skyrockets, and Lily, a top biologist, gets demoted to conservation center mascot. Other shifters dodge the registry, but even when things turn ugly–Anthony Moravian‘s painting depicts police dogs hunting her through the very forest she once studied–she stays. Why? Why would anyone endure discrimination and abuse? Why not run? Why not fight? Lily gives her answer. 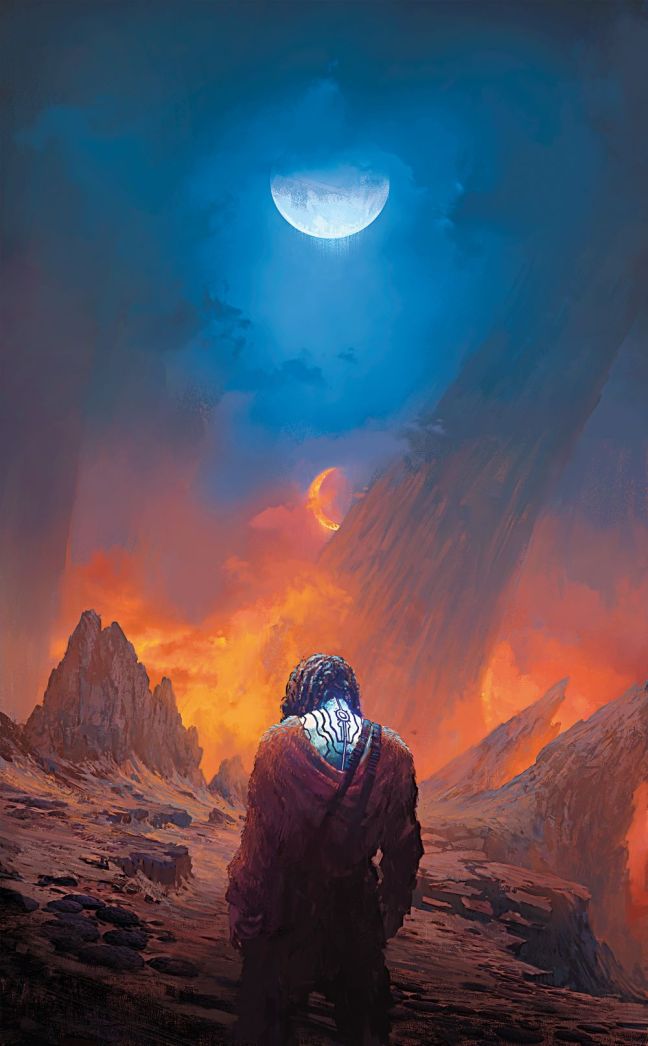 A nanotech-enhanced fugitive hiding from pursuit among refugees is drawn to a woman with a unique genetic heritage and a smile that echoes of home, but when trouble finds them, he must decide: save her or save himself? Ultimately, “All Light and Darkness” explores the terrible forces that plague our lives, bringing us together or tearing us apart. I couldn’t have asked for a better illustrator; Duncan Halleck portrayed that idea perfectly.