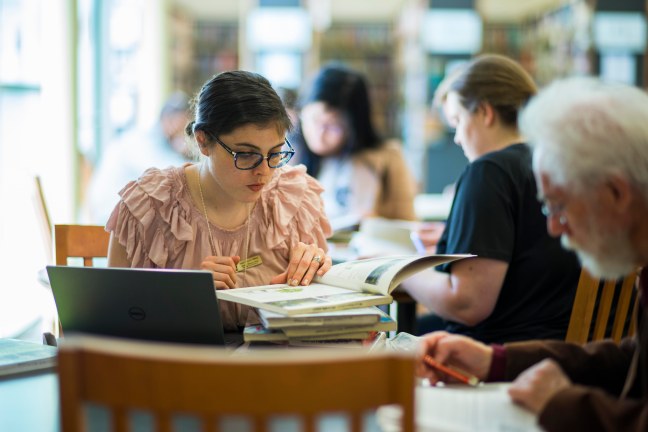 Aw, the infamous twenty-four-hour story. How I love and hate thee.

To my surprise, Dave and Tim introduced the twenty-four-hour story the day after our arrival. After a discussion on Hubbard’s “Search for Research” and where to find story ideas, Tim passed out the objects.

Luck must have had her eye on me because I was very happy with my object: a piece of wood broken from…something. Immediately, I began to brainstorm: half a heart, stamp, keepsake, sacred object, quest of restoration, key, nose, snail, carpenter, sculpture, tree missing a part of itself, layers… Already, characters and plots were forming in my mind’s eye.

After brainstorming over the objects, Tim and Dave showed us to the public library. I searched out books on trees, flowers, gardening, myths… I ended up picking up a stack of books. The ones I researched most were “The Tree Doctor: A Guide to Tree Care and Maintenance,” “Orchids: A Romantic History with a Guide to Cultivation Arranged in Three Chapters,” and “Forget-Me-Not: A Floral Treasury: Sentiments and Plant Lore from the Language of Flowers.” All three were troves of information and loaded with story.

After the library and a quick lunch, we went off to talk with a stranger–the last element of our twenty-four-hour story preparation. I wish I could say it went well. It did not. I still cringe at the memory. I just hope that by writing it out, and receive a cathartic reprieve instead of reliving the humiliation.

Firstly, I do not like approaching strangers. In fact, approaching strangers nearly always triggers my anxiety–hot flashes, sweaty palms, racing hart, swollen tongue, panicked thoughts, you name it. Then I have the wondrous crash afterward. The only times I’m okay is when I have a “hat” to wear. If I know why I’m there and what I need to do and I’m able to explain myself to the person, I’m usually okay. The problem? I wasn’t allowed to explain myself when chatting with a stranger.

Secondly, I got rigged with a mic by the documentary folk. Yeah… *face-palm*

Thirdly, we were trying to scope out HOLLYWOOD BOULEVARD for people to approach. If it’s not someone trying to sell you something, it’s someone trying to avoid being sold to. Every person I tried to approach very pointed gave me cues that they did NOT want to talk to me. Why? Because I very obviously WANTED to talk to them. In fact, I asked one lady eating ice cream with her family if I could stand nearby while I waited for someone. I’d intended to strike up conversation about traveling with kids since I have three and she was there with hers. That was a BAD decision. She very pointedly said “no” and asked me to go wait somewhere else. Looking back, I don’t blame here. I was acting downright suspicious. But man, that hurt.

At that point, I threw in the towel. I sat down and watched the fountain in the Mezzanine–my favorite spot now forever soiled by this horrid experience (no joke). One of the documentary crew, still following me on my saga, took pity and came to talk to me as my “stranger.” We had a good conversation about humanitarian documentary work he’d done in Columbia for the military. It was great, and his input found its place in my twenty-four-hour story. But, oh! That experience was horrible! I still can’t laugh about it. Maybe someday I will, but… Argh. Not now. Not yet.

After the stranger interview, we got back together for one last discussion: how to write a story in twenty-four hours.

I can’t remember if it was Dave or Tim that recommended it, but they talked about using formatted questions to develop a character’s personality, current state of self and life, and history. I’ve done that before with character outlines. I don’t find writing a long list of details like favorite foods or morning habits very helpful, but I find open-ended responses written from the character’s point of view very helpful.

For example, what’s your home life like? Then I might write a paragraph or two (or sometimes more) about where my character lives, what her family is like, what her room looks like, if she likes living there, what she wishes were different, etc… And after those few paragraphs, I’ve usually established that character’s voice and personality and a lot of her backstory and current state. And I’m able to remember it!

Dave very pointedly reminded us that a first draft should be considered “practice.” He said he wanted our twenty-four-hour stories to be complete stories, but we should expect them to be publishable. He said his process usually goes something like this:

He added that specific scenes might require more rewrites than others.

Dave also spent a little time discussing writer’s block. Dave has a lot of experience with writer’s block and leads workshop specifically on this topic. He said that writer’s block is usually caused by three things: ignorance, lack of a creative state, and too much communication. Ignorance because the writer becomes too overwhelmed with what she doesn’t know to move forward in the plot. Lack of a creative state because the writer is worried/afraid, either by crisis going on in her life or a problem with the creative process. Too much communication because it has led to too many mental distractions. His solutions were pretty simple.

Too much communication–>turn off the TV, phone, computer, any communication device, get away from people, and just sit quietly for awhile

It’s interesting to listen to Dave talk about writers block because I’ve faced it with every single one of my novel attempts. I usually hit about 20,000 words and then I can’t go further. Usually, it’s because I feel overwhelmed by my own ignorance, but I never recognized that until Dave mentioned it. Hopefully now I can beat it.

After this discussion ended, Tim and Dave sent us on our way to write for the next twenty-four-hours.