The Books of Ember

Amazing! I love all three of the Books of Ember.

Book 1: The City of Ember 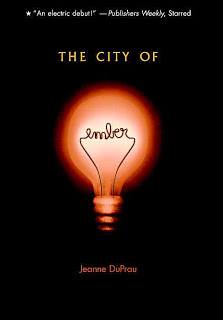 The first book tell the story of Lina and Doon, a girl and a boy that live in the City of Ember, a city constructed underground (though the two kids don’t know this). Lina and Doon along with the other resident of Ember know that the city will soon be uninhabitable. The generator that lights the city is failing. There are power outages every few days and they have becoming longer and longer. Everyone knows that one day, the lights will not come back on, but no one knows what to do about it.  No one adventures into the outer areas of darkness, so no one knows what is beyond.

The first book analyzes the development of society and investigates the needs of human communities.  The book alludes to the absence of history and loss of much of common human culture that we, as readers, take for granted in the real world. So many structures in our lives – religion, tradition, etiquette – were simply invented – as invented as civilization itself. DuPrau, the author, investigates this process of both individual and society. She even goes so far as to present the people of Ember inventing a religion founded on the idea of “the Builders”. Even though DuPrau simplifies the complexities of human decision and community, that simplicity also reveals many of the flaws in real-world societies. In some ways, DuPrau creates a caricature of societies failings, flaws, and inconsistencies.

Book 2: The People of Sparks

DuPrau continues this caricature in the Second Book of Ember: the People of Sparks. In this story, Lina and Doon have “egressed” to the surface and the people of Ember have followed them. They wander down to a small town called “Sparks” – a town that has struggling to establish itself after “The Disaster” (the end of civilization, basically). The people of Sparks agree to shelter the Emberites for 6 months and then take them to settle their own town (even though the Sparks people know the Emberites are unlikely to succeed). The Emberites are exposed to an entirely new lifestyle. They learn a new vocabulary; they learn about seasons and agriculture and fire; they learn about a history they never new they had; they learn about a God they had never heard of. Over time, tension and resentment build between the Emberites and Sparks-people, aggravated by a young Spark boy bent on revenge and a young Emberite man seeking power in leadership and conflict. As the conflict worsens and the Emberites see their deadline approaching and learn about the winter, Lina leaves to find answers. She makes friends with Maddy, a quiet woman who knows from experience the direction that Sparks is going. She tells Lina the following:

“It’s like this,” Maddy said at last. “Say the A people and the B people get in an argument. The A people do something that hurts the B people. The B people strike back to get even. But that just makes the A people angry all over again. They say, ‘You hurt us, so we’re going to hurt you.’ It keeps on like that. One bad thing leads to a worse bad thing, on and on.”

It was like what Torren had said when he was telling her about the Disaster. Revenge, he’d called it.

“Can’t it be stopped?” said Lina. She shifted around under her blanket, trying to find a place to sit where rocks weren’t digging into her.

“Maybe it can be stopped at the beginning,” Maddy said. “If someone sees what’s happening and is brave enough to reverse the direction.”

“How would you do that?”

“You’d do something good,” said Maddy. “Or at least you’d keep yourself from doing something bad.”

“But how could you?” said Lina. “When people have been mean to you, why would you want to be good to them?”

“You wouldn’t want to,” Maddy said. “That’s what makes it hard. You do it anyway. Being good is hard. Much harder than being bad.”

Lina returns to Sparks seeking the right moment to “reverse the direction”. That moment arrives and both Doon and Lina make difficult decisions and teach the adults a very important lesson.

The People of Sparks is an important commentary on the results of human action. The town of Sparks is a small, simple model of the real-world, real-world politics, and real-world conflict. As refugees flood cities in Western Europe and the United States and political tensions rise, this story presents an answer that is so simple and so difficult that few people take it seriously. The People of Sparks was frustrating for me to read because it simplified a situation much more complex than she portrayed; and yet, the answer is the same: an act that forgives rather than takes revenge. Sometimes simplicity is much harder to understand than complexity. Sometimes we want things to be complicated so that we have an excuse to fail or to not try to begin with. This story is one that I wish every person would understand and appreciate.

Book 3: The Prophet of Yonwood

The third story, The Prophet of Yonwood, occurs before the Disaster. It is the story of Nickie, a girl who has three goals and the town of Yonwood. Yonwood is a small, isolated town in the mountains. Avonlea Tower, one of Yonwood’s residents, has a vision of the destruction of the world and falls ill. Brenda Beeson becomes the “Prophet’s” spokesperson, declaring Avonlea Tower’s ramblings as the Word of God. Mrs. Beeson’s good intentions soon becomes her crusade against anyone or anything that she feels fails her opinion of “good” and “right”. As a perfectionist, she attacks those with different lifestyles, different interests, and different opinions than her own, encouraging her followers to act on anything they “feel a wrongness” of. In the end, this “feeling of wrongness” amounts to simply individuals’ likes and dislikes. As Nickie meets the people of Yonwood and tries to “fight evil” with Mrs. Beeson, she begins to question what is right and wrong. As she sees the results of Mrs. Beeson’s crusade and the pain it causes, she begins to ask who is right. And as the world begins to crumble into chaos, she asks herself if anyone is right:

“She didn’t see why God would say one thing to the Prophet of Yonwood and another thing to another prophet halfway across the world. Because clearly not all these people who said that God spoke to them heard the same thing. All the fighting nations said God was on their side. How could God be on everyone’s side?

She finally stops taking other people’s opinions on what is right and what is wrong and decides to make her own decisions. She comes to conclusion that right and wrong is less about her feelings and more about considering the feelings of others.

Even though I enjoyed this last books a lot, I do have some differences of opinion. Throughout all three books, DuPrau depicts a ignorance in religion at best. It is easy to understand how religious zealous can turn from what is Right to “what is right to me”, but DuPrau portrays nothing on absolute truth. She presents the faulty opinion of “because there are so many contradictions, then none of the above can be correct”. Just because the different ideas don’t agree, doesn’t mean that one of them is not correct. She rules out the idea of absolute truths in her stories and reverts to a more relativistic approach. As attractive as relativism is – an excuse to approach right and wrong passively – it also denies the existence of truth. No one is right or wrong, so right and wrong do not matter. However, that is incorrect. Our existence has been founded on absolutes: absolutes in science (like gravity), absolutes in society (like the benefits of education), absolutes in law (like justice), absolutes in culture (like the need for community), and absolutes in religion (like love and service). In my opinion, there is a Right out there and we will know it when we come across it. Sometimes it just takes a while to come across it and put it into words. How long was it before we became aware of the atom?

Like the picture of the dust mite Nickie loved because it reminded her that there are things in the world that we cannot see that are there–there are other things in this life that we, as individuals, may have not yet made pictures of.

In all, I thoroughly enjoyed these books. They are well-written and thought-provoking. I look forward to when I can read them out loud to my kids.

[To be continued after I read Book 4, “The Diamond of Darkhold”…]