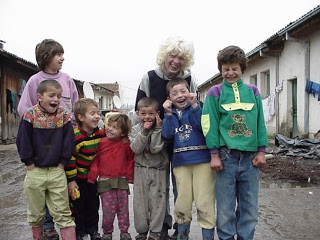 In high school, I was passionate about serving internationally in humanitarian aid and peace-keeping. I also had a passion for music. I never imagined that the two could be combined.

After I graduated, a friend introduced me to the Shropshire Music Foundation. This foundation organizes community music classes to promote unity, ethnic tolerance, and to treat post-traumatic stress disorder caused by war. SMF has programs in Kosovo, Uganda (specifically for child soldiers and refugees), and Northern Ireland (to promote tolerance between Protestants and Catholics). 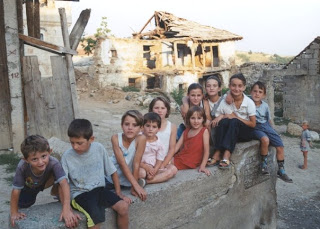 When most people think of humanitarian aid they think of sanitation kits, food drops, doctors, vaccinations, etc… But people need much more than that, especially children. In Kosovo, children of all ages witnessed and experienced abuse by police, being forced from their homes, arrests and the murder of their parents, relatives, or friends, and the NATO bombing. In Uganda, militias continue to abduct children as you as five from their homes and turn them into child soldiers. In Northern Ireland, politics and violence have left the region dissected and isolated, the people fearful of one another, and tensions barely masked by police and military forces.

As these children emerge from such atrocities, much more than their property is damaged. For most, their very spirits have been ravaged – sown with fear, anger, depression, and violence. New clothes, new homes, new roads, and better health are all nice, but, in the end, something much deeper is the matter.

Something that requires gentleness rather than grit.

Something that requires healing rather than replacing.

The Shropshire Music Foundation makes a song from their lives, weaving their experiences into a harmony with existence, creating a song that is both sad and courageous.

If ever I have a chance, this organization is where I want to be.