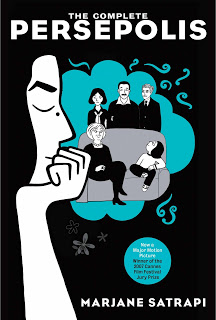 The Complete Persepolis
by Marjane Satrapi

The Complete Persepolis is a comic-strip autobiography. Rather than the average, page-by-page, word-by-word, approach to autobiographies, Satrapi illustrated the first 24 years of her life in brusque, humorous comics. In these 24 years, she covers the Islamic Revolution and how it affected her childhood and family, the beginning of the Islamic government’s oppression, her escape to Europe and the experiences she had there, her return to Iran, and finally, her self-imposed exile to the West.

Satrapi’s writing style is both humorous and thought-provoking. She succeeds in presenting the ironies of the Iranian lifestyle: They’re admiration for Western fads and technologies and their disdain for Western politics and morals. The institution and enforcement of Islamic morals that, in effect, encouraged Western practices as a means of rebellion. The fact that behind closed doors, their culture was entirely different from the one presented out of doors – the one presented to appease the government; the one regarded as the typical Iranian outside of Iran. The many skewed perceptions of “the immigrant”, “the Westerner”, “the Iranian”, “the traditionalist”, etc… create a snare of paradoxes, misunderstandings, and abuses wrapped in the macro-world of politics, power struggles, revolutions, and religion. Satrapi describes it as a type of “schizophrenia” that Iranians were forced to live both inside and outside of their nation.

This book allows readers to witness the paradoxes present in that kind of life: not belonging to one place or the other because you are at once part of both and yet neither.

The only criticism I have of the book is actually in Satrapi’s presentation of the modern, “liberated” woman. Several times in Satrapi’s book, she relates situations in which she is criticized with engaging in premarital sex. She usually responds with violent accusations against the woman for judging her. At one point in the book, she even accuses these women of being “traditionalists at heart.” I think it is narrow-minded for Satrapi to feel that any woman that adheres to some traditional values is a “traditionalist.” Satrapi presented herself as so liberal that any woman that did not embrace total freedom of choice, right or wrong, is a traditionalist to her. Women who criticized her for engaging in premarital sex were jealous and frustrated at “being virgin at 27 years old”. I’m sorry, but not every woman thinks that way and not every woman that does not think that way is a traditionalist. I, for one, do not believe in premarital sex, and I consider myself a “liberated” woman. In other words, I choose to not engage in sex acts before I am married, not because of social pressure (being Mormon, I do have that social pressure hanging over me), but because I feel it is right to engage in sex acts only with my husband–not my lover or fiance, my husband.

Yes, the Iranian government is wrong in some of its oppression of women. I agree with Satrapi when she ridicules the veil and the chador and the Guardians of the Revolutions ideas of inappropriate conduct. I agree with her when she describes the results of fear. She has many enlightening thoughts on power and ideology and education. However, I also received the impression from her book that sometimes she judged as harshly as the government she hated.

Outside of countries like Iran, there is a lot of pressure–social and political–to embrace alternative lifestyles whether it suits your beliefs or not. As I stand against this pressure, I wonder if Satrapi would consider me a “liberated woman” that rebels against the social and political will, or would she consider me a “traditionalist” since my values are not her values?